Dangerous Flames, the first book in the Mafia Hearts series, is on sale for 99 cents! 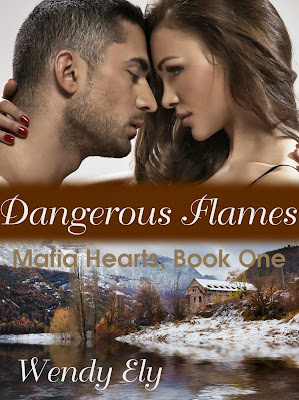 Back from spending her teen years in Italy, Gabrielle Medini wants answer to the hard questions. She quickly learns that the Mafia still has a hand in controlling society and her father is the Don of the largest mob organization in the area. When a hit order is taken out on her father and one of his members will be doing the killing, Gabi’s mother demands Gabi’s disappearance. For good. This time she refuses to go alone.

The Mafia doesn’t seem so glamorous any more. Not sure what Mik’s role in her father’s crime family is but sure he is involved, Gabrielle has reason to believe that her secret love's safety is in jeopardy too.

Mikolas Russo is one hit away from becoming part of the Medini crime family. But is this what he really wants? Killing people for money is what he has been trained to do even though he’d give anything to trade the nightmares for sweet dreams of the forbidden Gabrielle. Thinking he has the chance to reveal his feelings to her, he arrives at her house to find her brandishing a loaded gun, ready to take control.

Will the truth fulfill her desires, or will Mikolas be the one to shatter everything?