Check out the new release by Frey Ortega! 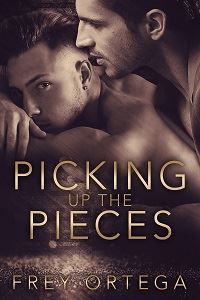 Blurb:
I'm Noah Linkletter, and I'm broken.
Shattered, really—and I've been trying my best to ignore my problems by chasing temporary highs wherever I can find them. I put my makeup on and dance my way through a club, and by night's end, I find a man who's willing to indulge in a little act of sin to help me forget the demons in my own head.
It only takes one moment for my entire world to turn upside down. I'm left bloody and beaten, but even through the haze I meet him.
Farid Hassan.
A man who is strong and intimidating yet calm and patient. A man who wants me, despite my demons. A man so wonderful, he's willing to help pick me up the pieces.

Excerpt:
I turned my face up to the ceiling as he heaved and pressed against me from behind. A solid, hard body, brimming with virility. The scent of him was intoxicating, his cologne mixing with his sweat. He slid into me roughly, with full force. Covered by the loud music around us, the clapping of his body against mine was in time to the rhythm of the beat playing in the club.
He had one arm wrapped around my waist to draw me back toward him. His other hand grasped my neck firmly, not quite choking me, but making me wheeze every so often from the constriction.
I let out a soft, garbled cry, muffled only by my arm that I pressed against my lips. I bit down into the skin, making indents in my flesh from how harshly I was biting.
There was no love here, no emotions. It was pure, carnal, bestial lust and attraction. I saw him from across the dance floor, his gaze met mine, and within ten minutes we’d found our way to a bathroom stall.
Some people are drawn to the casualness of it all. They enjoy the chase, and the pleasure, and the unsaid goodbyes as clothes are quickly put back on. It’s possible they might exchange numbers, when the fucking is good enough, in the hopes it might happen again. Others, like me, use it to fill a void, when the darkness gets to be a bit too much and the only way to stop it from closing in around me is with a distraction.
I revel in those moments of pure clarity when, for the briefest second, the only thing I am is a sheath for a cock—a hole to be used—and I can focus on the sensations of pleasure coursing through my body. They were like a drug to me, little jolts of pleasure-lightning emanating from my pelvis, throughout my core, all the way to my fingertips.
“Such a pretty boy.”
The man behind me was solid and warm and, from what I remember, he was attractive. Most importantly, his dick was rock hard as it slammed into me over and over with wild, reckless abandon. I could feel the steady slide of lube, and every so often he would lean back to dribble some saliva over where his cock met my hole and the lubrication would get nice and sticky again.
I gasped and smiled, feeling his fingers interlace with mine as he pushed our hands up to the walls of the bathroom stall. My knees buckled, and I bit down on my lower lip to keep from moaning too loudly. People outside the stall probably already knew what we were up to.
“You like that?” he whispered, his breath hot and tingly against my ear. I knew his words were just platitudes. He didn’t really care. Just like how our fingers were intertwined, I knew it was more an empty gesture than anything else. He wouldn’t be fucking me in a bathroom stall within the first ten minutes of meeting if he actually cared.
I didn’t mind. I knew what this was. I knew not to expect more. This was already enough.
“Yeah,” I replied, my voice a little higher than it usually was but muffled by my arm. I knew if I showed some form of pleasure, he would be a bit more enthusiastic. Maybe it would even be enough for him to start pleasuring me.
His thrusts became as erratic as his breath started to hitch.
“F-fuck,” he moaned. “Pretty boy has a really tight ass.”
Inwardly, I sighed. He was close. I could feel it in the way he gripped me tighter. Sure, this felt good—but I had hoped maybe he would reach around, perhaps give me a little bit of common courtesy.
It was too much to hope for in a restroom fuck, I supposed.
“Fuck!” he exclaimed.
Moments later, we shuffled out of the bathroom stall, his load firmly deposited in the condom that had been flushed down the drain. I was sore in all the right places but managed to stuff my erection down my pants.
We were both in front of the mirrors. Some of my makeup had smeared from the sweat, and I had a serious case of raccoon eyes now.
Life went on, as usual.

He loves writing about people, especially people of all different shapes, sizes and backgrounds, falling in love. You might also find him playing video games from time to time! His favorite ones are MMORPGs, and role-playing games in general (and not just the ones in the bedroom.)