Daisy Shayne has a list. Her life has been planned out on a legal pad that she carries in her purse since she was sixteen years old. Now her list is nearly complete, she is about to marry her fiancé Landon, start her new job in the fall and be completely settled. Or is she? Landon is going on tour with his brother Grayson’s band for the next six months as the assistant to the new manager, Tad and is bringing her with him as an extra pair of hands to help the band.

Daisy is now stuck on a crowded tour bus with six men when her plans start blowing up in her face. Things are not what they seem and nothing is making sense. Landon is pushing her away and Grayson is pulling her close. Daisy feels pulled to Grayson which doesn’t go unnoticed by him. Amused and unable to control himself around her Gray decides to hit on her the first moment he sees her. Gray’s new obsession is Daisy, who he deems his own little Widlflower even after he finds out she is to be his sister-in-law. Whatever it is about her he can’t help himself. He is desperate just to be near her.

Temptation, betrayal, and lies on top of booze, tattoos, sex, laughs and love. While making friends and traveling the country Daisy must come to terms with what she wants in life. All while she learns to deal with the rough and rowdy of taking Shaft on Tour. It’s going to be a long hard ride.

How did this happen to me? Just months ago I was in a loving, committed relationship with a man who I believed adored me. Nothing was standing in our way of being married and having the white picket fence, babies and all the happiness I could stand. Now I sit here on the edge of a bed in a shitty tour bus crying into my hands while a dozen little white sticks lie all over the floor laughing at me proving that I am a total fuck up.
The diamond on my hand does nothing but make me angry as it glistens, wet with my tears. I’ve screwed everything up. I let myself believe for a while that I could have a happy ever after. I let myself think that I was worthy of something as precious as love. Instead, I have ruined at least four lives in the ashes of my monumental lapse of rational thinking.
I always think things through. Daisy Shayne never jumps without looking where she would land. I had a plan. I mean literally, I write the shit down and check it off as I complete it. I was nothing if not meticulous in my calculating of my life this far.
My parents planned nothing. I watched them constantly bailing water from the boat, borrowing from Peter to pay Paul and getting nowhere in life because of not having a plan. Well I had a plan damn it! Now as I look at my list all I want to do is jump from my boat and let myself drown. It would be so much easier than to face what is coming when those bus doors open and my life comes to an end. There is no hiding this. There is no fixing the situation. It’s going to destroy everyone involved, including myself in the process…
Wait! I am getting too far ahead of myself. You need for me to start from the beginning to get the full picture here. You need to know everything and then you will understand. 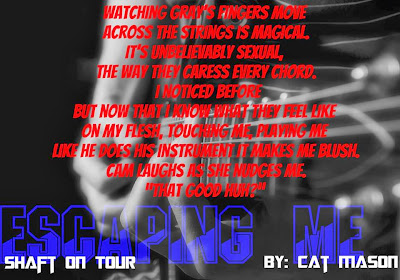 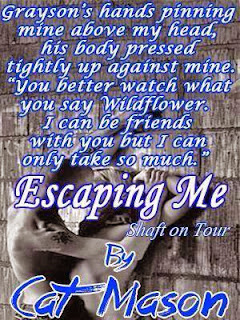 Cat Mason is thirty years old and a mother to three children. She was born and raised in Granite City, Illinois which is just across the Mississippi river from St. Louis, Missouri. She currently lives in Virginia with her husband and children. Previously publishing Contemporary Romance under her real name, Amy Cox until she decided to lose the filter and let it all hang out. When she isn’t writing, she is reading or spending time with her friends and family.

a Rafflecopter giveaway
By The Chronic Romantic - February 11, 2014 No comments: