New Release! The One She Loves - The newest in the Corbin's Bend series by Constance Masters 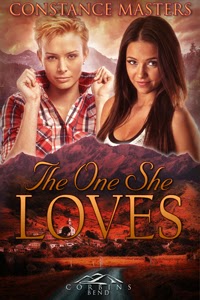 Carol and Crystal love the lives they share in Corbin's Bend with their nine year old daughter Brianna.

Carol is a taken in hand bundle of fun but she is not a Susie homemaker. Their house is often times a mess. She'd rather spend time living life than cleaning. She loves Crystal and Brianna and she loves spending time with her friends. She often finds herself over her girlfriends knee for a bare bottomed spanking for getting her priorities wrong.

Crystal is a fire-fighter and the head of their loving home. She's fit, neat and organised. Apart from her career, Carol and Brianna are her world, and while she knows friendships are important, she feels somewhat threatened by how much her girl shares with her friends and not with her.

When Carol decides she wants a baby, it throws their house into a spin. Crystal isn't sure and wants to wait. When Carol's three naughty friends from Leading the Way (4th in the Corbin's Series) see how disappointed their friend is, they help the young mom go on a sperm search with hilarious results. Only problem is, Crystal knows nothing about their hijinks.

Can a punishment fix this mess or will what Crystal sees as disloyalty tear them apart?

Dashed Dreams!
Excitement is a hard thing to repress. I remember when I was a little girl (just a short while ago) if something good happened, I would run all the way home, bursting through the back gate, slamming it shut and making a beeline for my mum. I just had to get out the news.

I remember one day at school, my friends and I decided we would have a party. On the way home we stopped at one girl’s house to put the idea to her mother, no dice. The dream slipped a little. We stopped at the next girls house; no joy the there either. Mine was the final house only I was on my own by then, each of my friends having been made to stay at their own houses. I ran the rest of the way home, just dying to inform my mum that we would have to be the ones to have the party because I was the last chance. Things didn’t go as well as I planned. I was an hour late home and everyone had been out looking for me. Trust me, I did not get the reaction I had hoped for.

Carol didn’t get the reaction she’d hoped for either when she told
Crystal that she wanted to have a baby.

Constance Masters is a writer of spanking romantic fiction. Her stories are a little like real life, with families, fun, laughter and people that love each other while living within a domestic discipline lifestyle. At this time she has twelve published books.
Constance loves to write and loves that she is able to fit that into her busy home life in Australia. She has a husband, five children and four grandchildren all of whom she loves to spend time with. She also loves watching crime shows and reality television. Extreme chocoholic and lover of champagne.

a Rafflecopter giveaway
By Unknown - December 15, 2014

Email ThisBlogThis!Share to TwitterShare to FacebookShare to Pinterest
Labels: Constance Masters, Corbin's Bend series, The One She Loves